In the past two days, the Starbucks store in Ciqikou, Chongqing has been caught in a huge online whirlpool because it is suspected of "driving away the policemen who eat lunch boxes".

The thing was caused by a screenshot: 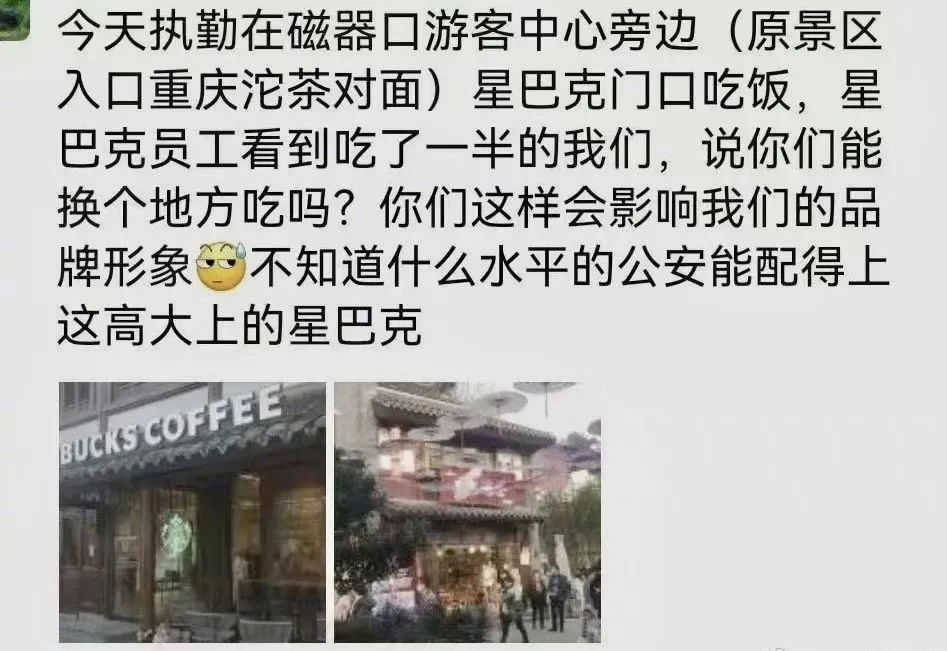 A public security officer on duty at the Ciqikou Ancient Town Scenic Spot in Shapingba, Chongqing, posted a circle of friends saying that he was kicked out while eating at the Starbucks entrance in the scenic spot.

After the screenshot was released, it quickly spread on the Internet. The store received a large number of negative reviews with the lowest score, and a large number of netizens organized groups to shoot Douyin and question the clerk.Eating and broadcasting snail powder on the spot; even sending white flowers, coins and eggs. 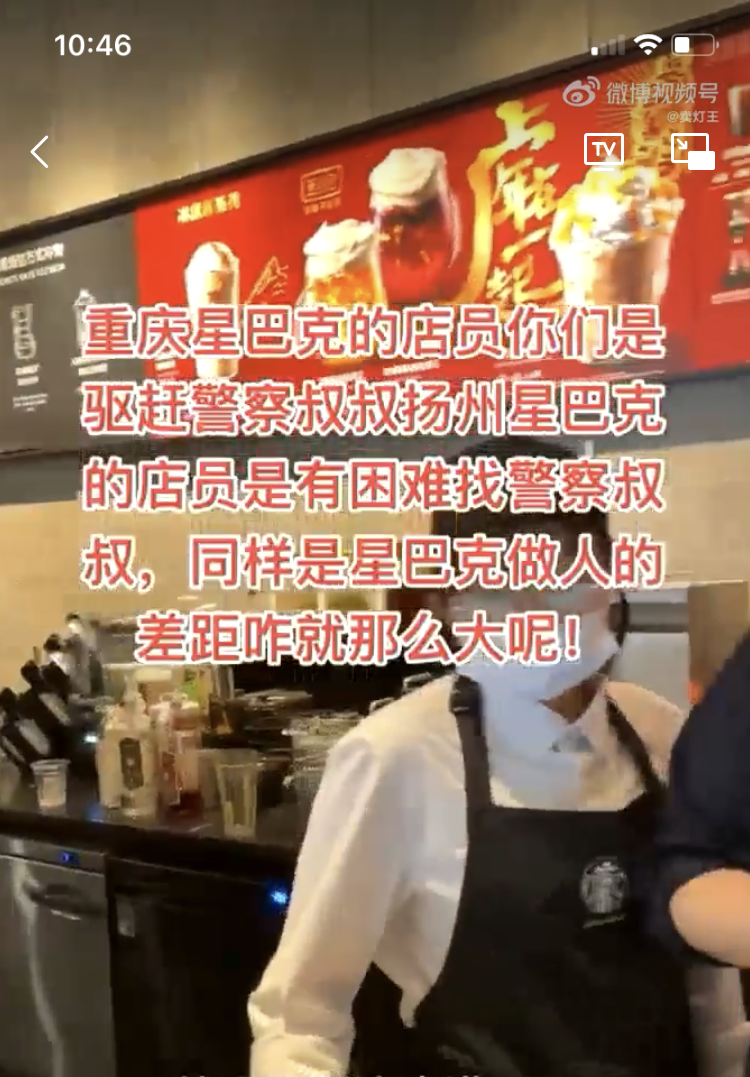 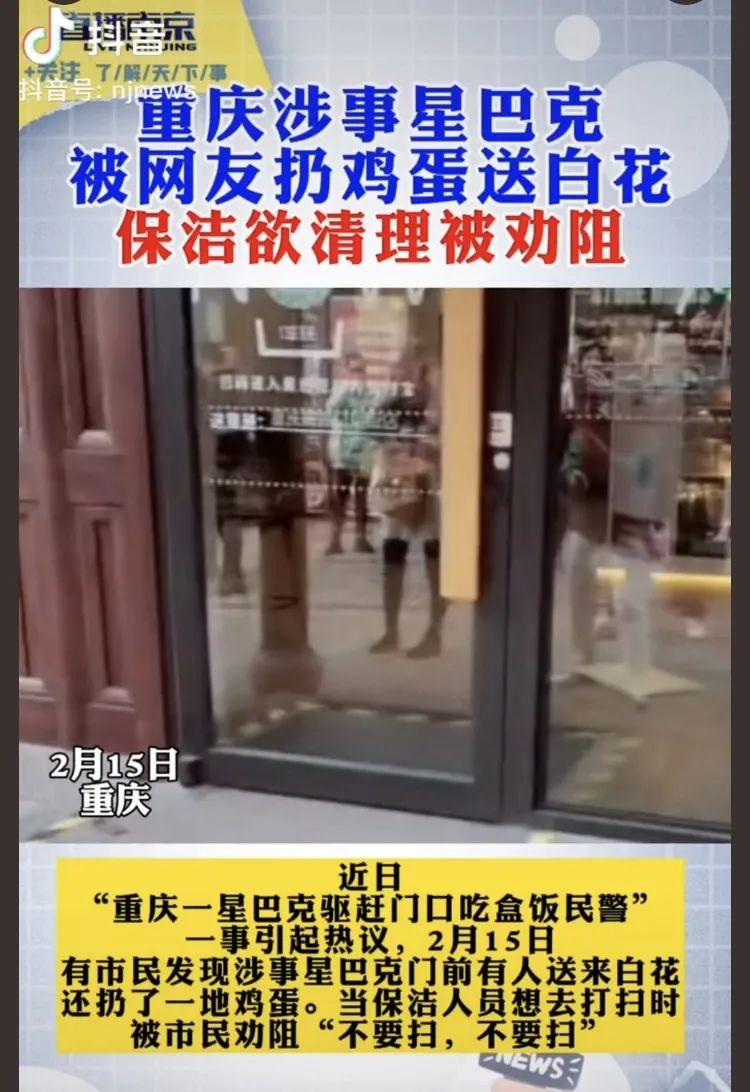 Immediately afterwards, the media also stepped in to report.In the case of frying the whole network, Starbucks China's official Weibo issued a statement on the 14th, saying that it did not drive out and complain to the police, which was caused by a misunderstanding of communication between the two parties, and apologized for this. 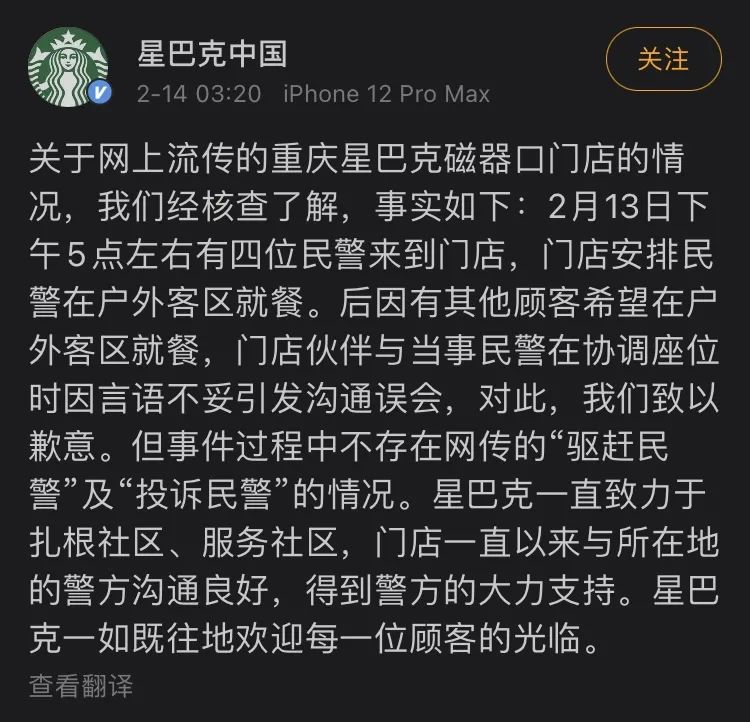 But Starbucks' statement obviously cannot dispel the raging anger of netizens,"A cheap coffee, who gives you a sense of superiority?"

Below all related topics on Weibo, there are messages like this: 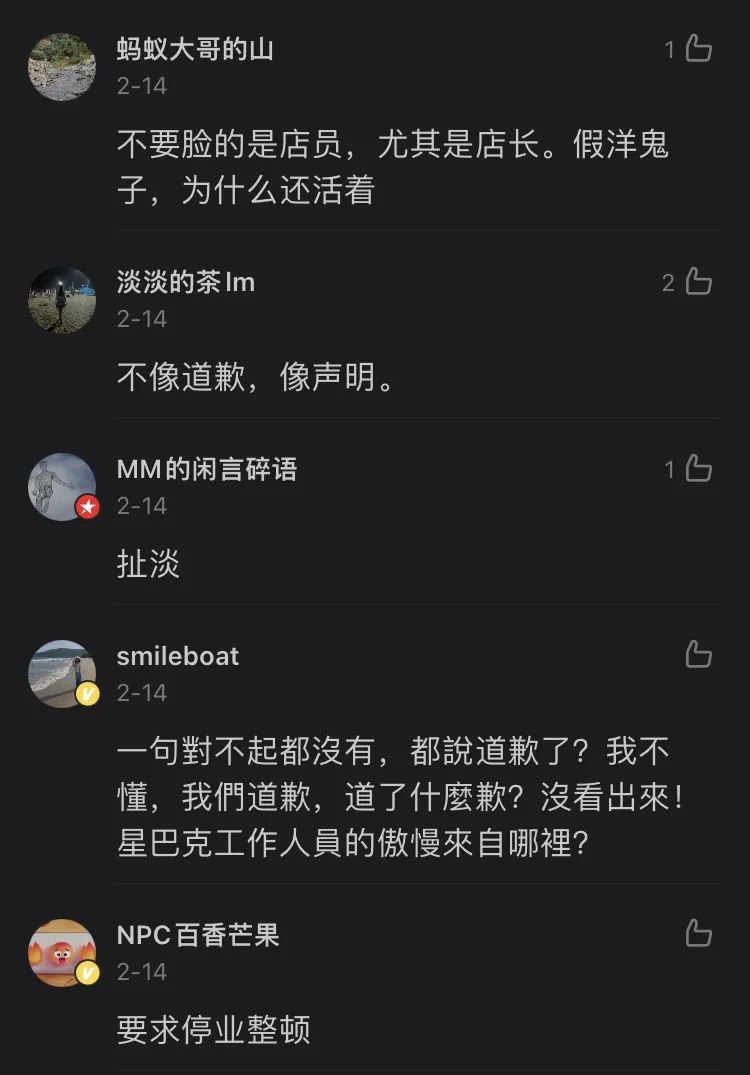 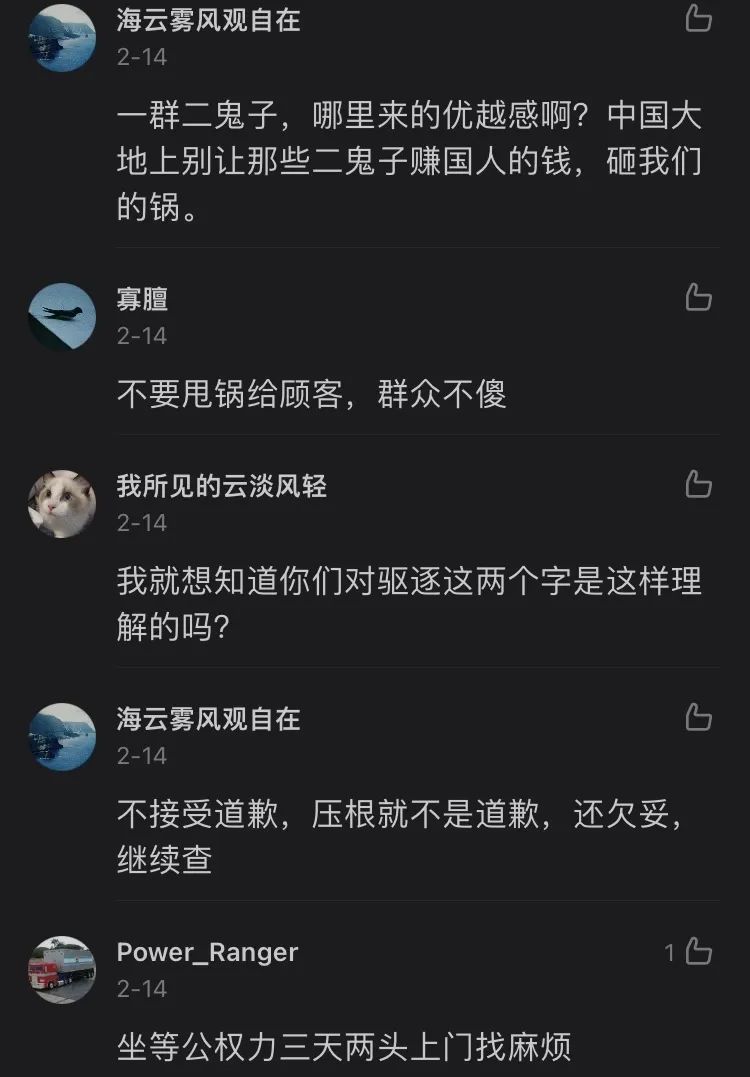 Even if there are occasional different voices, it will be drowned out in a wave of angry and denounced voices. 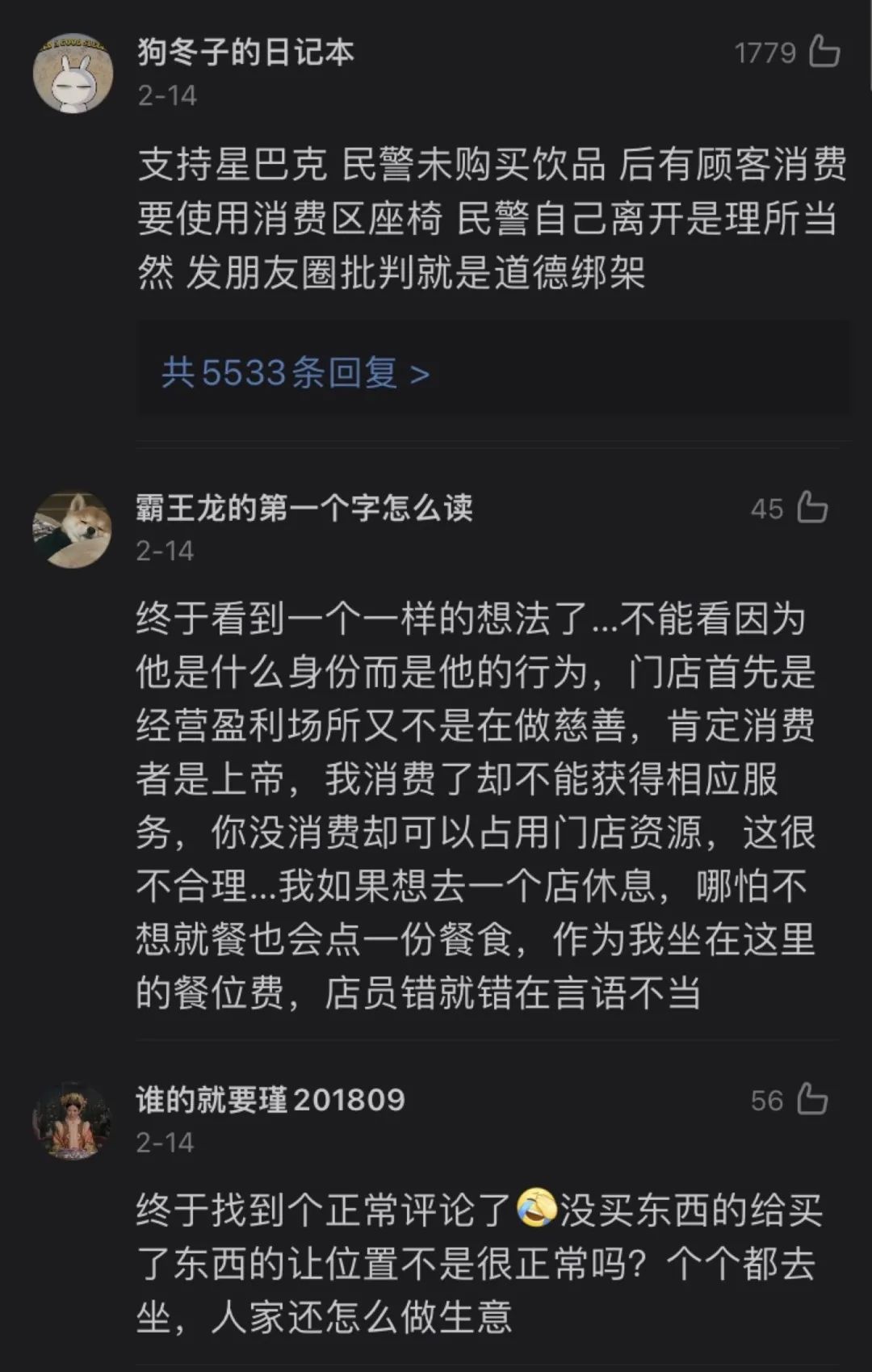 (Note: The screenshots are from the public comment area of ​​Blue V Weibo accounts such as "China News Weekly", randomly intercepted, without rhythm)

In addition to the comments from netizens, People's Daily Online also posted a statement on the same day after Starbucks China issued a statement with "Starbucks please take back your arrogance"As the title issue, he posted a Weibo comment on the incident. 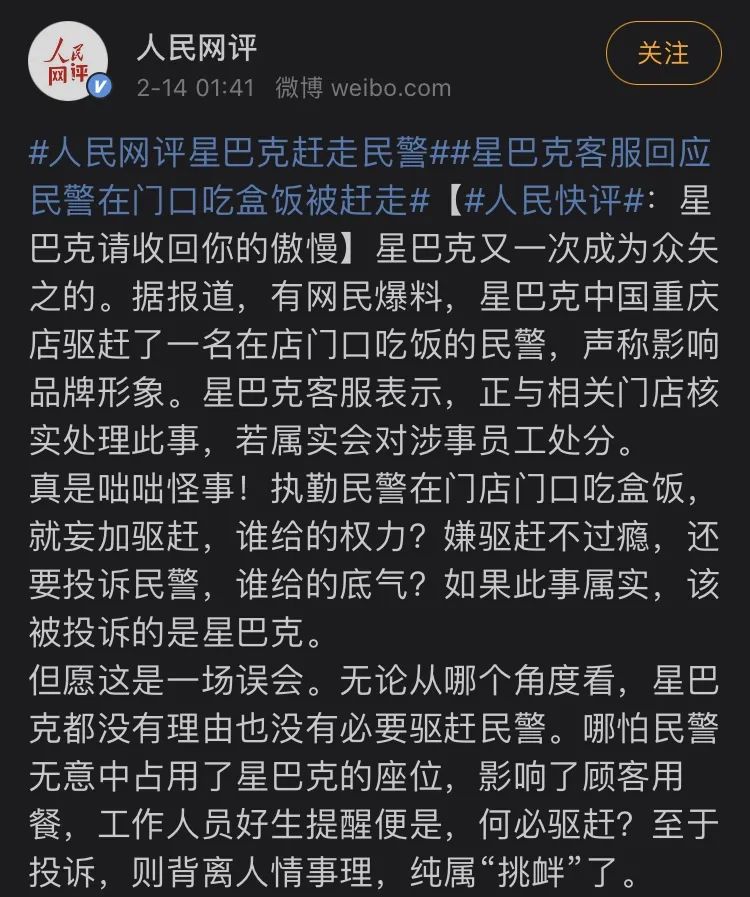 It turns out that the top catchphrase came from here, but I stumbled upon a "not inappropriate" message in the comment area:

This is a digression.

Many people may not have read the speech of People's Daily Online. The end of this Weibo post reads: "Of course, there is no need to overemphasize Starbucks' status as a foreign company. It is unforgivable for a domestic company to drive away the police." 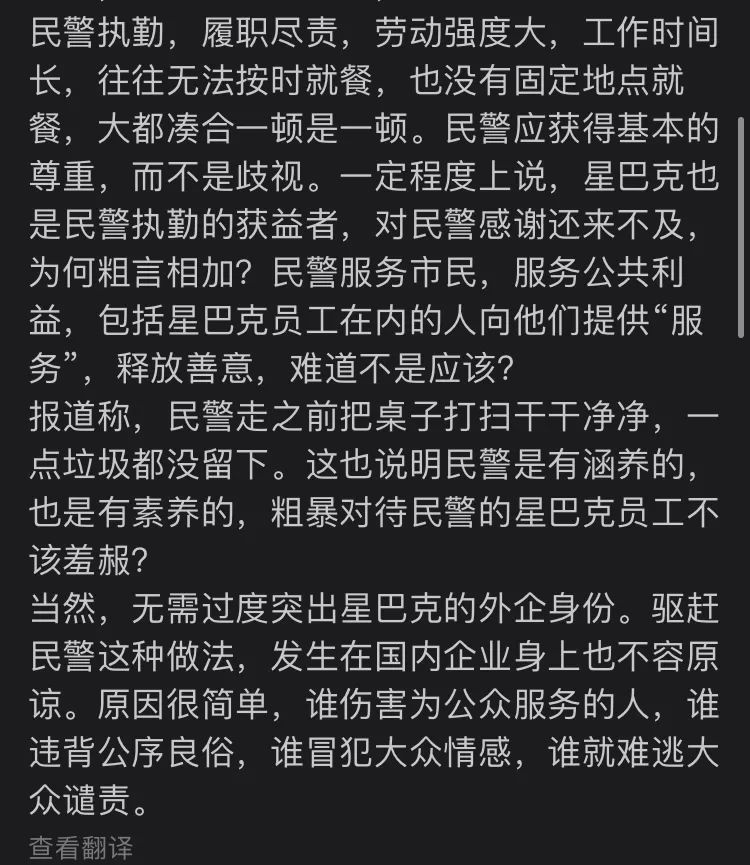 Therefore, the entire incident, from its occurrence to the present, is clear in outline but vague in details.I went through all the relevant news again and found the following questions, hoping to find some clues of the truth:

1. After the incident, the police officer involved has been in a state of "disappearance". Even if both parties tend to keep a low profile, after a few days, as a party, there should be some new developments unless they are suppressed;

2. Due to the contradiction between the statement of the police and Starbucks, the latter said that there was no "eviction" and "complaint".Who should be believed without evidence? (As long as there is a complaint, both the office and the business will have a record, but this record has not been published so far);

Our attitude towards a matter should be to pursue "what happened that day" instead of shouting at malicious comments. 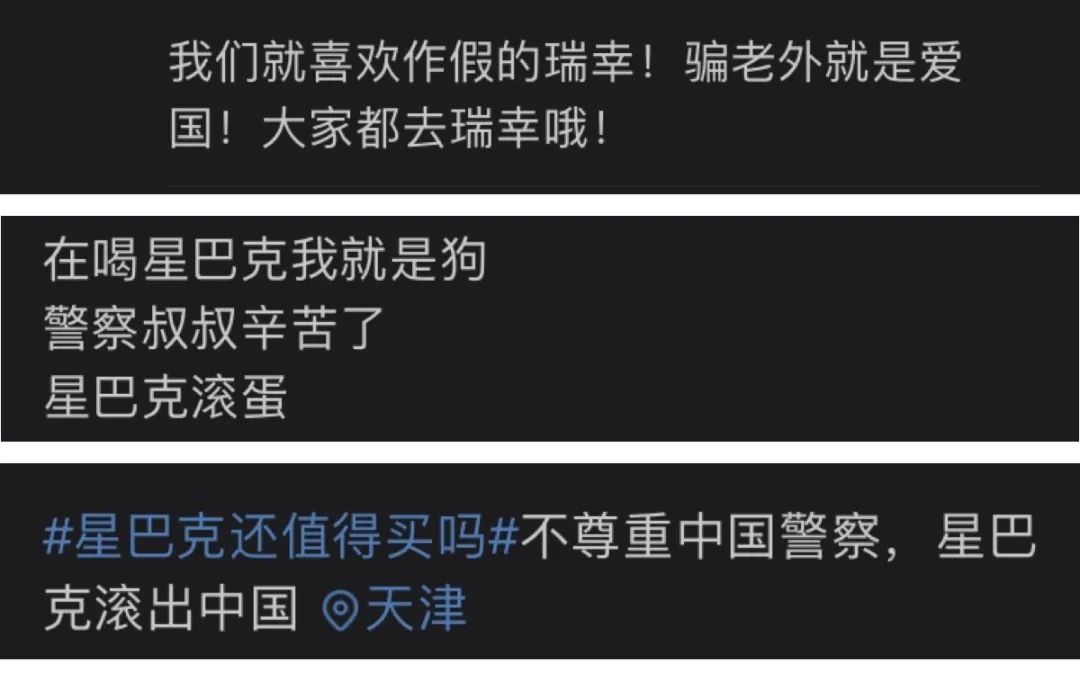 The emotions and disagreements caused by the Chongqing Starbucks incident actually came from "opaqueness".If the fact is that this Starbucks has done something wrong, then it should make a public apology to the police and the public; if this is taken out of context and literally, then such extreme practices and venting can only bring about more serious consequences.

Because of the practice of one Starbucks, it has risen to the entire brand or even all foreign companies. What is the difference between this and the police force having a black policeman and thinking that all policemen are big bad guys?Is it really desirable to vent anger and patriotism?Don't forget how the innocent Japanese car owner was smashed through the skull by the iron lock. He is also our compatriot.As far as the matter is concerned, the Internet needs calmness and a pair of eyes that distinguish right from wrong.

However, one wave has not settled down again and again!In two days, Starbucks on the cuspAnnouncing a price increase.It is said that domestic Starbucks has raised prices by 1-2 yuan. 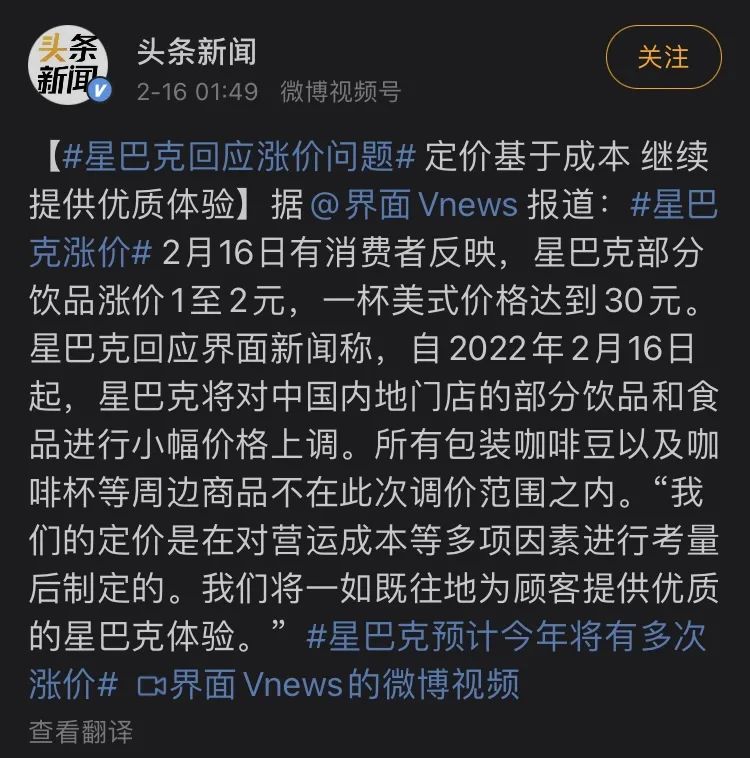 In fact, Starbucks in the United States has already raised prices a long time ago.The coffee giant from Seattle officially announced a price increase notice on the first day of the new year.Inflation, increased demand, COVID-7.5 are all reasons, and of course the facts.Inflation in the U.S. soared to XNUMX% last month, and labor and product costs also surged. 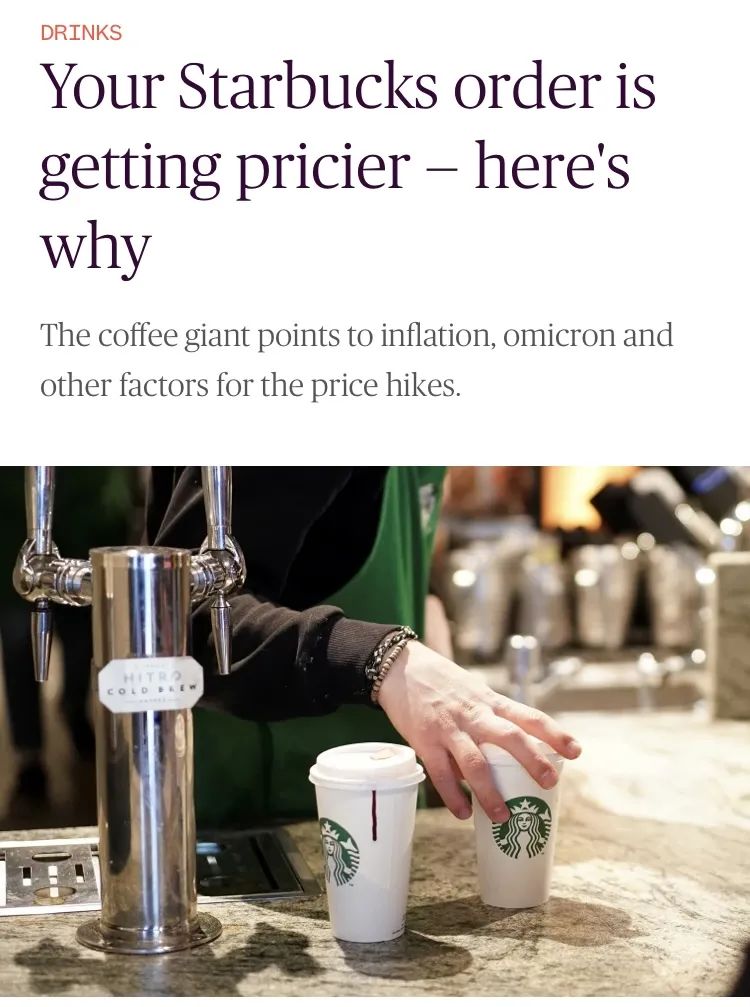 How much Starbucks will increase in the United States has not been announced yet, and it is not known which items will increase in price.In fact, there was a wave of price increases in October last year, and there was also a small increase last month (the increase is not expected to be noticed), this time is the third wave, and the US media predicts that there will be a fourth wave within this year. .

Don’t underestimate the price change of a cup of Starbucks coffee. For us ordinary consumers, it is equivalent to first-hand inflation, and the price increase of goods and services directly affects the most everyday things, such as using Life-long coffee.

While watching the news, Big Data also pushed me these two items in succession: 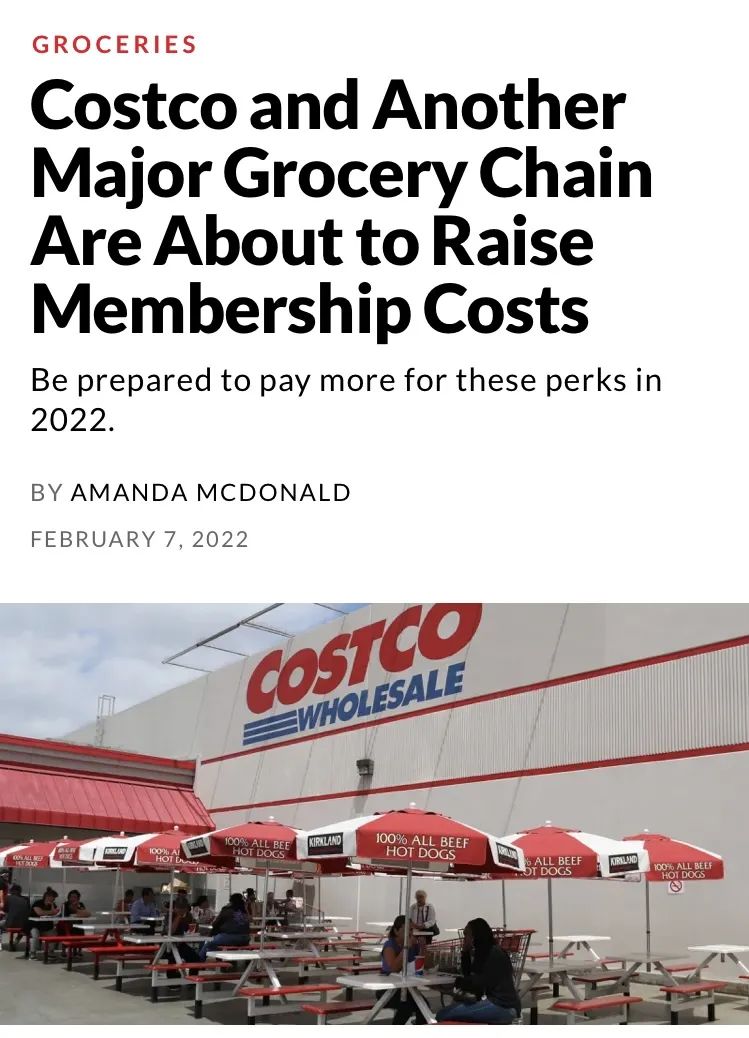 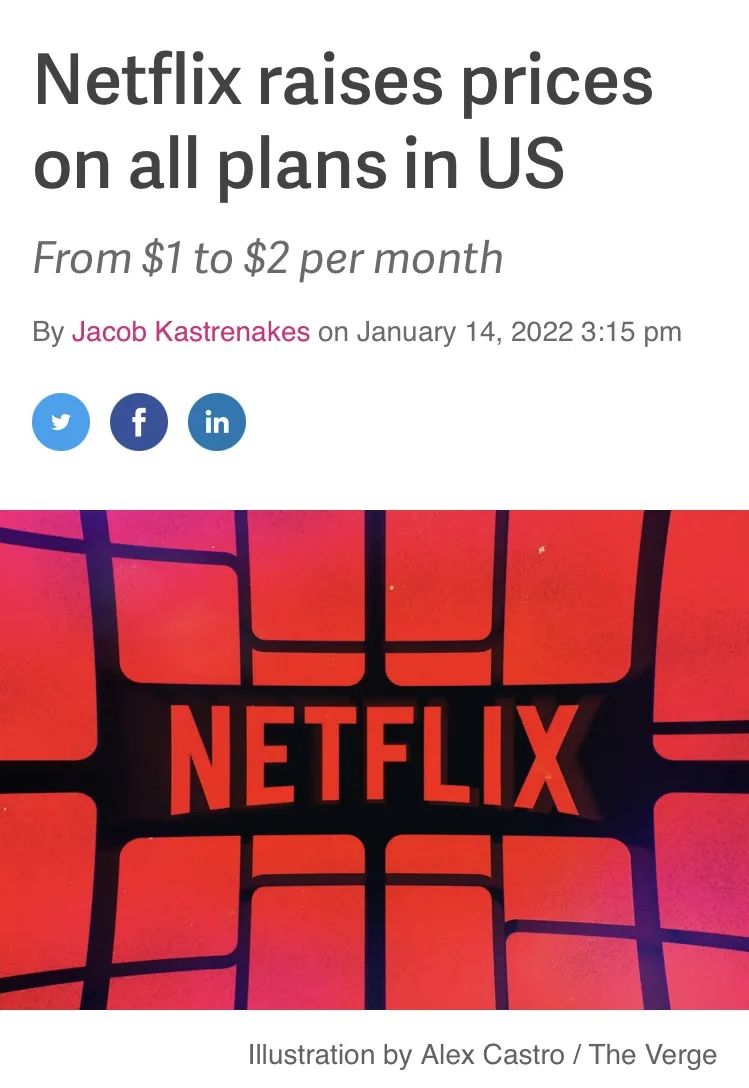 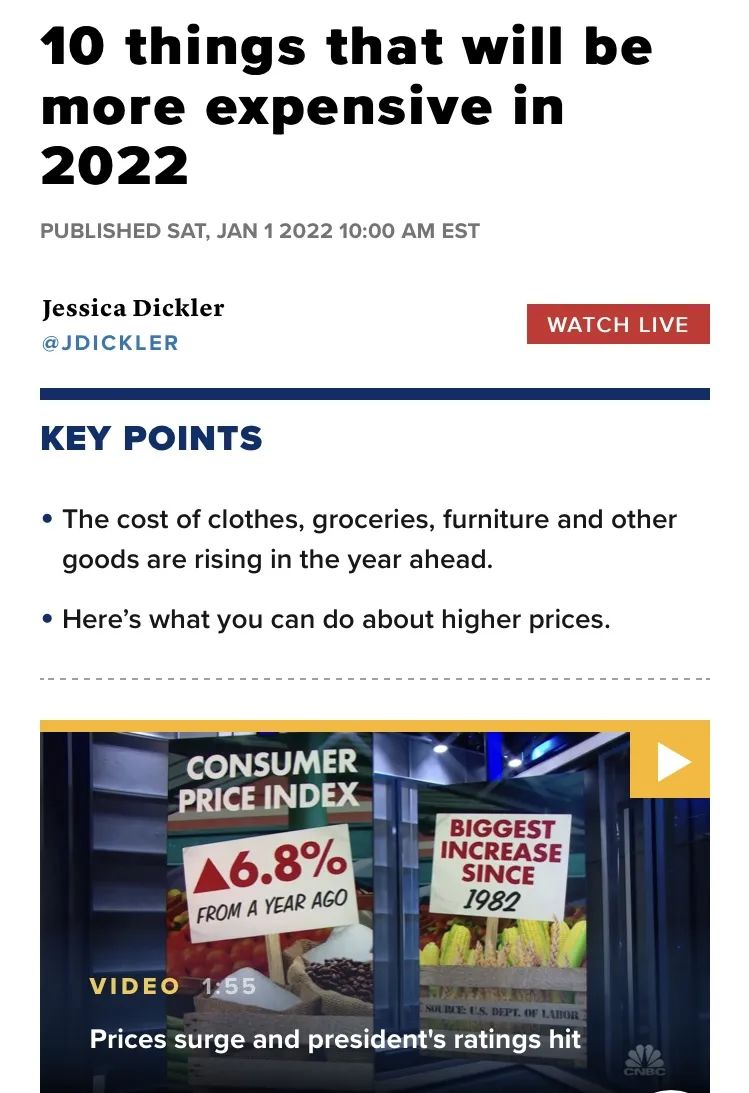 After reading it, I feel that I can’t live anymore, so quickly start breaking away from separation and low-consumptionism!This is really:

Rising, rising, the magic weapon of the economy;

Provinces and provinces, the lifeblood of the masses.

All pictures come from the Internet, the copyright belongs to the original author 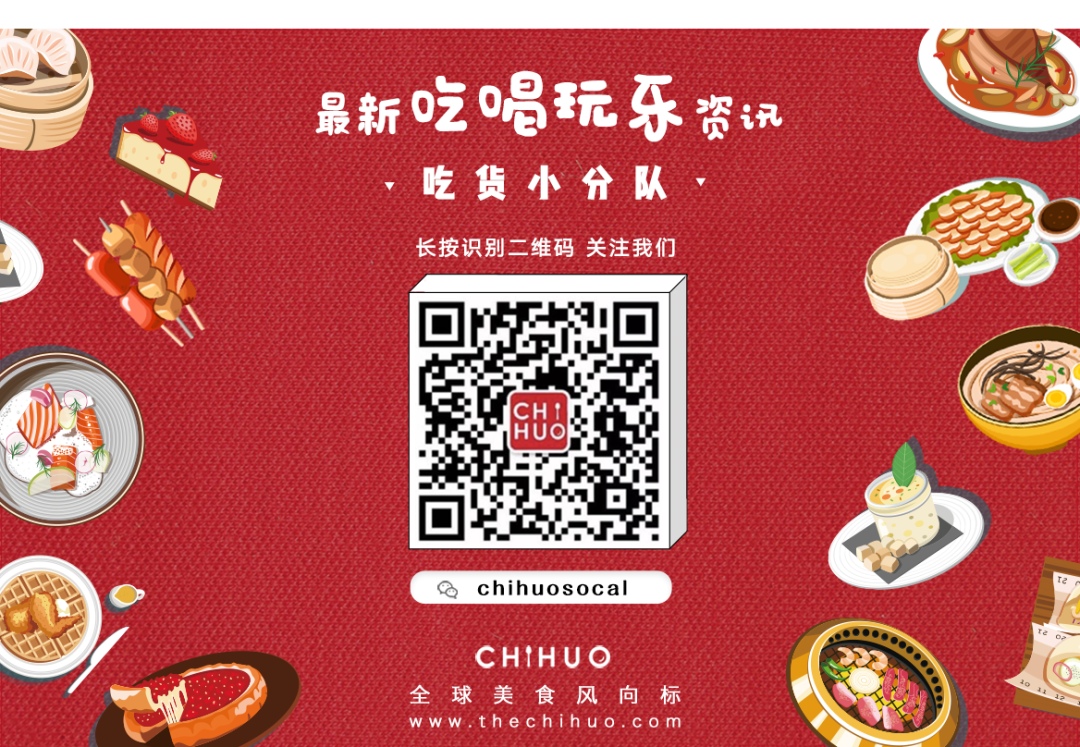 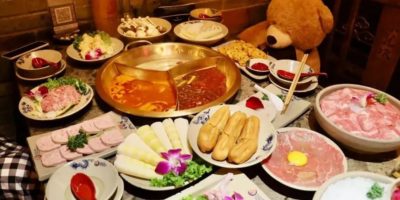 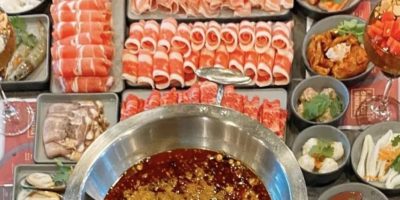 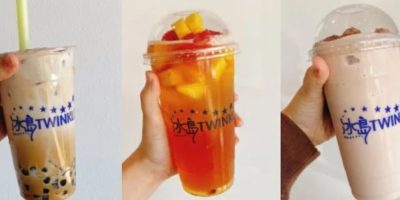